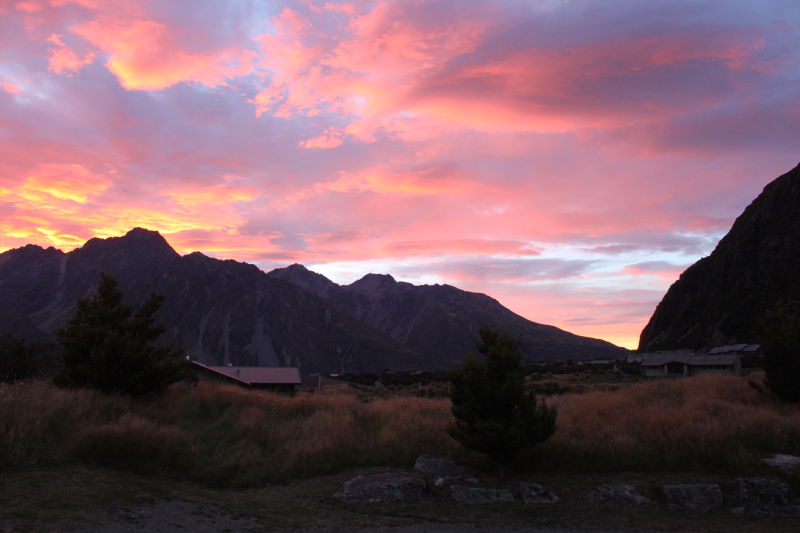 Whilst performing my morning exercise routine, I noticed in the growing light that the usually beige kitchen blind had turned pink. I flung a fleece on over my nightshirt, grabbed the camera and hobbled out of my cabin in my as-psychedelic-as-the-pink-sky slippers. I gawped as crimsons, yellows, scarlets and reds radiated behind the Southern Alps like a giant kaleidoscope until with a final flourish a crisp blue welcomed the day. This was sunrise at Aoraki Mount Cook National Park in South Island New Zealand. I was in Sir Edmund Hilary country and it was glorious!

Bolstered by the colour therapy, I shuffled inside and took a warming shower. I dressed in more suitable attire and, after glugging down my first tablets of the day, set off up the valley to the Hermitage Hotel for breakfast. Taking deep breaths of the conifer-infused air, I hoped the exercise in the natural surroundings would ease the stiff, burning joints and flu-like fug of my Rheumatoid Arthritis. I limped along, aided by my trusty walking stick and armed with camera and guidebook. Memories of long lost geography lessons popped into my head as I marvelled at the U-shaped valley excavated by the Hooker Glacier thousands of years ago, its steep, grey sides highlighting the vast difference in elevation between the parched grass of the valley floor and the craggy peaks.

A few paces further and I glimpsed Aoraki Mount Cook lording it at the head of the valley flanked by its entourage of jagged neighbours. I paused to admire New Zealand’s highest peak cloaked in snow and magnificent at over 3,500 metres. I turned left and continued alongside the dry riverbed. A rabbit hopped into the undergrowth as a cry sounded above. I looked up to see a bird circling high in the sky. Taking another pit stop, I consulted my guidebook. The ‘kek’, ‘kek’, ‘kek’ of the creature gave it away as a New Zealand falcon.

I carried on over the bridge crossing the stream of rocks and spotted a greenish, brownish bird, about 30cm long, perched on the roof of the Visitor Centre. I had already encountered these cheeky chappies on a trip to Milford Sound. This was a kea, the world’s only alpine parrot. When it flew off, red and blue flashes under its wings revealed a clue to its evolutionary past. 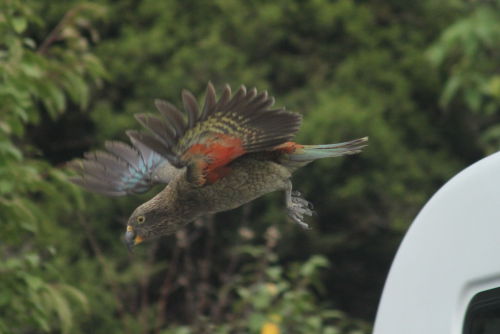 The kea landed on the hotel roof, joining its partners in crime amidst raucous squawking. I continued through the avenue of bushes mesmerised by tiny flitting birds. My guidebook suggested fantail, silvereye, and grey warbler but they were far too quick for any identification from me.

I hobbled up to the hotel and veered off around the now modern building, the original Hermitage of 1884 having been lost in a flood and its replacement razed by fire. I halted at the statue of Sir Edmund and followed his gazed to Aoraki Mount Cook where he had honed his climbing skills before conquering Everest in 1953.

Drawn by squawks, I headed around the back of the Hermitage. I took the weight off my protesting feet and watched the keas raiding the car park their mission seemingly to attack all the vehicles in it. After chuckling at their antics, I entered the hotel and headed to breakfast. 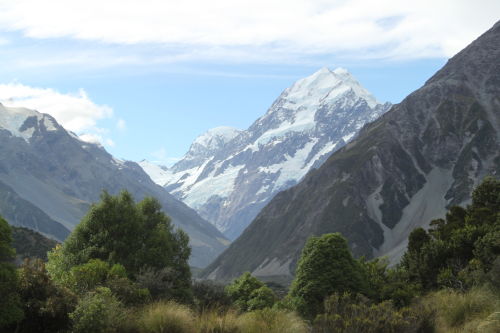 While I tucked into my muesli and banana, I reflected that my ‘Everest’ amble had loosened my joints and suppressed the fug, for a little while at least. Can nature heal? I gazed at Aoraki Mount Cook through the picture window, its pristine white peaks glinting in the sunshine, and concluded it’s certainly very healing.